When Christina and I, (@SydneyEventBlogger) attended a media launch of Aristotle's Neutral Bay, I thought I was very lucky to have a photographer dine with me, plus there was a bonus; she is Greek!

As soon as I walked into this newly renovated restaurant I knew this was going to be a great lunch; it just had that vibe! The restaurant itself is decked in gold accessories, including the cutlery, and the ceiling is cathedral style with ropes cleverly placed hanging from it. Maria, the owner, told me that the restaurant was designed to look like Aristotle & Jackie Onassis' yacht. That's what this restaurant feels like; luxury! I adore Jackie Onassis Kennedy - she just oozed sophistication, elegance and style.

Our waiter, Miguel, had the biggest smile and best customer service ever! He was wearing a striking shirt, and I just had to ask him was it his uniform? He told me it wasn't; "I like to lift my game because I love this restaurant and my job so much". Well that certainly shows through, Miguel - you are the bomb!

Personally, I think there are a number of elements that make a rememberable restaurant and they are: service, decor, vibe, and of course great food. As far as I'm concerned, Aristotle's in Neutral Bay gets 10/10 for all! 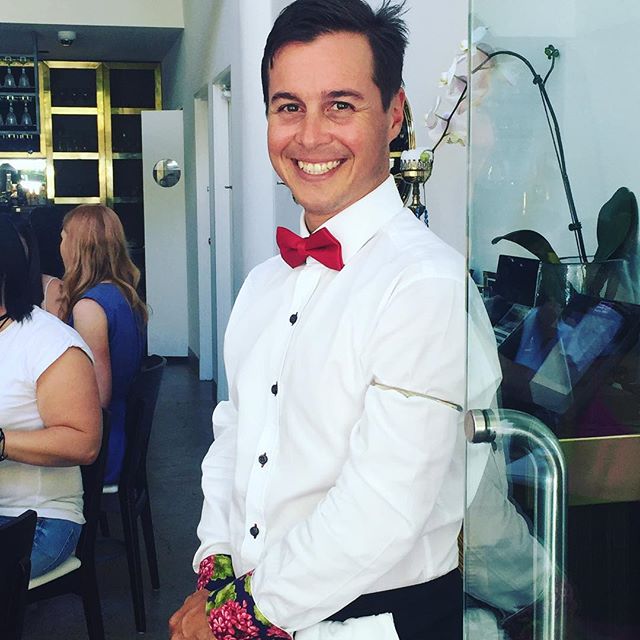 I started with a glass of sparkling wine, and once seated, a bowl of olives arrived. The plates were stunning, along with the gold cutlery that I mentioned previously. There was also a cocktail on offer, however I'd already had a sparkling in my hand so I never tried the cocktail. Christina said it was maybe a little sweet for her tasting, no doubt due to the floss on the top. The cocktail was "Greek Goddess" and boy does she look like one! Sipsmith Sloe Gin, Campari, Peychaud's bitters, pink grapefruit, Greek Prosecco, vanilla pashmak.

Taramasalata - I was surprised at the colour of this dish, which is one I'm very fond of and always order when dining in Greek restaurants. Instead of the 'pink' colour it was more beige. Maria told Christina this is because they don't use fish roe that is dyed pink. There was only a subtle fish taste, and the dip was light and easy to spread on the chargrilled pita bread that accompanied it. The pita was fluffy, soft and topped with fish roe.

Aristotle's Haloumi. Oh yes! I would have this every day if I could. The Haloumi was served with pomegranate, red grapes, honey, balsamic, oregano and walnuts. The Haloumi was creamy and good quality, combined with the sweetness of the warm grapes and honey, it made for a very nice combination. I was in Haloumi heaven!

Chargrilled Octopus. When this dish was served I was a little shocked at the size of this tentacle and expected it to be quite tough. I couldn't have been more mistaken! The octopus was served with preserved lemon, garlic, chilli and parsley and is seriously good.

Barbecued Cypriot Sausages. According to my Greek companion, Christina, these traditional Greek sausages take hours to prepare. Aristotle's home-made sausages are served with Lemon and Tzatziki and are full of flavour and juicy. You probably would never settle for the humble 'banger' again after tasting one of these little delights.

Assortment of spit roasted lamb, chicken and pork. A tantalising plate of lovingly cooked and tender meats served with an amazing range of sides:

Greek Village Salad: Tomatoes, cucumber, capsicum, olives, Spanish onions, oregano and feta. Anyone can make a Greek salad, however I was very much taken with this one, the ingredients were delicate sizes and the dressing was crisp and light.

Feta Chips: OMG - my late mother-in-law used to make the best roast potatoes on this planet they were fluffy inside and super crispy on the outside. Well these chips were mini mum-in-law's roast potatoes, and the feta cheese topping added another element that made these chips super-awesome.

Pistachio Baklava Cigar. Served in a cigar box! By now I was done after so much eating, so I only had a bite of this dessert. A very elegant pastry served with a creamy rich custard. The presentation was amazing!

To be honest, Aristotle's will no doubt become a very popular restaurant since opening last week, and I'm sure they won't need reviewers because it will be all word of mouth! I'll be going back, it's fabulous. That says a lot for an Eastern Suburbs person 'crossing the bridge for dinner"...... Just kidding; I love the Lower North Shore, and I'm just jealous I don't live there. Yet!

Gin Palooza is returning to Sydney from Friday 4 September (Postponed)